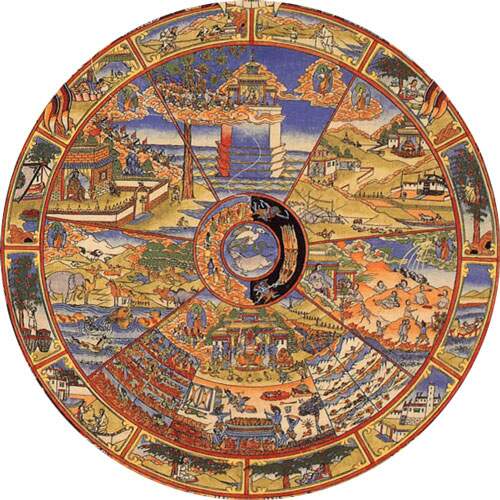 In Buddhism, Samsara is the eternal wheel of human existence, linked to human suffering. The inability to learn from our mistakes is what keeps us on this eternal cycle. So here we are, ending a cycle, at a breaking point in these 15 years of Revolution, a morally and economically bankrupt country.

This was the golden opportunity to rise, to learn, to grow as citizens. To expect more from our leaders and to become mature and responsible Venezuelans. I fear we have been stuck in a sort of adolescent anarquic and selfish behaviour. “Quitate tu pa’ ponerme yo” should be the Country’s official slogan. Government changes, more often than not, are based on murder and coup d’état than votes on the ballots.We have had over 10 constitutions in less than 100 years (that’s one every decade) and I wouldn’t be surprised if a new one didn’t pop up soon.

But as I watch some in the opposition criticize Capriles for not burning the country to ashes in his quest for power, I can only assert that we have not changed. We are not ready. We want the fast and “easy” way out. We don’t want to convince the other side, we want to impose our ideas on them.

The student movement had a clear intention on what they wanted to achieve this February 12th. A rape attempt in Universidad de Los Andes ignited the protests. The students, fed up with the crime in their almae matres, took to the streets. When some of them were incarcerated in Tachira, the nationwide protest followed.

They were within their rights. It was “justo y necesario” (just and necessary). Leopoldo and Maria Corina and other oppo leaders tried to make this into something else, constructing this  “plan” to remove Maduro from office.

Today, seeing Capriles in his press conference, I was ever so glad to have voted for him. I may not agree with all that he has done, but he has been true to his word, being a leader, and governing for opposition and chavistas alike. But it seems as if many think the opposite.

As the curtain closes on one more farce, I had hoped that by this time we had reached a Moksha, a liberation. But standing at the edge, I can only see the endless Samsara up ahead.

Navalny Is No Mirror for the Venezuelan Opposition

From Chavismo to Trumpism: the Felipe Pérez Martí Case