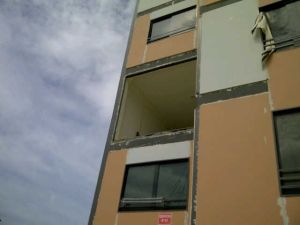 Now, another complication: the quality of many of the buildings may be deficient, according to the head of UCV’s Architecture Faculty, Gustavo Izaguirre.

In an interview with El Nacional, Izaguirre mentions that some GMVV buildings use the Forsa Construction System, a method that saves time by using formwork made of aluminum (as a “mold” that is used to later place the concrete). The quality of other materials and possible violations of safety regulations have been reported as well.

Some GMVV housing has already shown deficiencies: strong winds literally blew off part of some apartments in the Ciudad Caribia housing complex in June, just two months after it was opened. (See the photo above.)

Unfortunately, these safety concerns won’t slow down the house-building frenzy. Election time is getting closer and those still without house are getting more restless, something the Chavernment has decided to deal with in its own way.