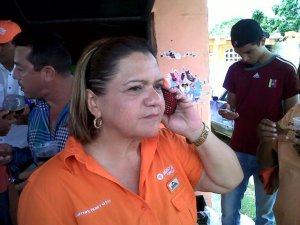 In early March, I wrote about Lumay Barreto, the opposition (VP) mayor of bordertown Guasdualito (Apure State) who was swiftly impeached by the PSUV-controlled municipal council for allegedly “abandoning her post”.

As expected, the TSJ’s Constitutional Hall has validated the council’s decision, confirming its president Víctor Blanco (PSUV) as caretaker. Gladys Gutierrez (head of both the TSJ and its Constitutional Hall) was in charge of the case and wrote the ruling, which was published Monday.

Barreto called the ruling “a coup d’etat” and accused PSUV council members of doing everything in their power to sabotage her work.

The group that reunites all opposition mayors (Asociación de Alcaldes por Venezuela) released a statement in which they strongly reject the ruling, noting that it’s based on elements not found in the current legislation.

Given that less than half of the four-year term has already passed, a snap election is possible. But if the highest court decides so, Blanco could remain as mayor until the next municipal elections, to be held (tentatively) in late 2017.

But that wasn’t the only problem faced by Ms. Barreto: over the weekend, she and the local police officers in charge of protecting her were detained by Apure State Police while attending last Saturday’s protest in San Fernando de Apure, prompted by the boss of her party, the jailed Leopoldo López.

The excuse that was used was an apparent order from a Vice-Minister to hold the local police patrol and the officer’s weapons. In the following video, Barreto explains what happened, including the excessive number of police used for this case. Barreto blames the entire incident on Apure State Governor (and former Vice-President) Ramon Carrizalez (PSUV).

To get an idea of the legal grounds regarding this case, you can read the analysis written by constitutional lawyer and Prodavinci writer Jose Ignacio Hernandez.

Solidarity Beyond Community Kitchens in Times of Persecution

Diosdado Cabello: ‘No Vote, No Food!’